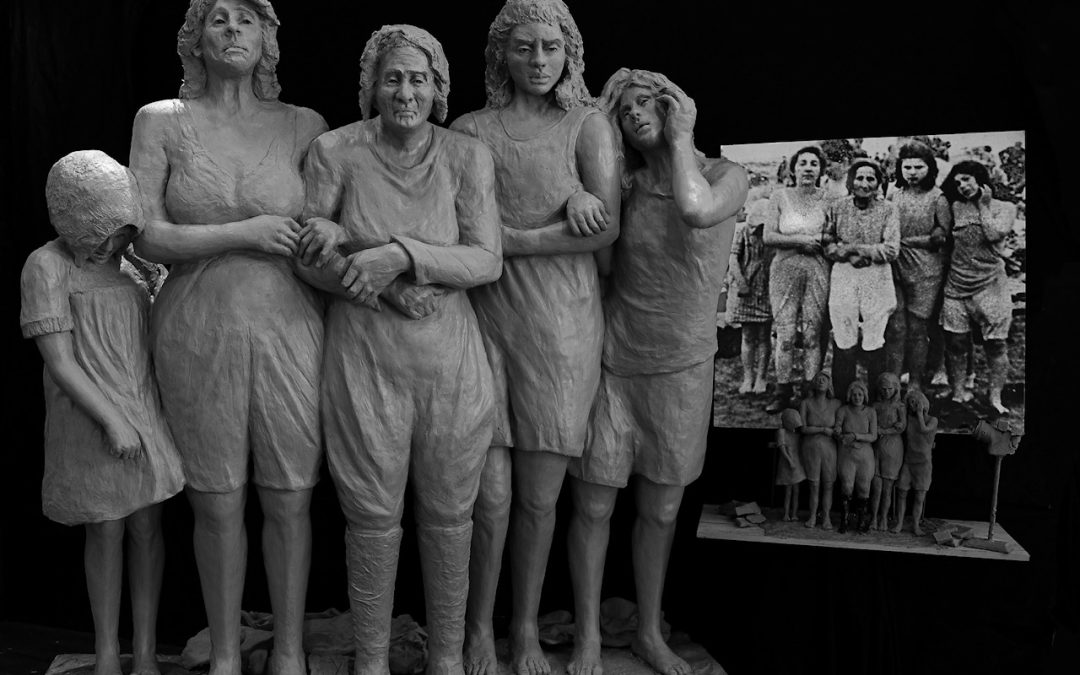 Larger than life, the clay sculpture was surprisingly soft to the touch, as if the doomed women it recreated were alive.

Created by a Greensboro artist, Victoria Carlin Milstein, the clay version is only a model, set to be cast in bronze and placed in Carolyn & Maurice LeBauer Park in 2023 as the first women’s Holocaust monument in North Carolina.

I dare you not to be moved by it.

Inspired by a picture taken by a Nazi photographer, the sculpture features four sad-eyed Jewish women and a frightened little girl who were forced by German soldiers to strip to their underwear in the bitter cold before being executed.

The women undressed as they were ordered. But one of them only to a point. One shred of her dignity she would not surrender: She refused to remove her boots.

Thus the title of the work, “She Wouldn’t Take Off Her Boots.”

Then she and the others were marched to a beach and shot to death.

The five were among 2,749 Jewish women and children who lost their lives in three days of mass murders, most them in public, in the Latvian town of Liepaja.

In sweeping acts of icy cruelty the condemned were shot in a park and in an Olympic stadium and near a lighthouse.

They were, in turn, only a fraction of the 6 million Jews who were killed by Nazis and Nazi sympathizers between 1941 and 1945.

Also executed in Liepaja were communists, Roma and the mentally ill.

I had been moved by photos of the clay model of the sculpture in the past. But seeing it in person is more visceral and intimate.

The mixture of sadness, anger and defiance in their eyes is at once haunting and inspiring.

I paid a visit to Milstein’s cozy storefront studio on South Elm Street in early November, as the world around us seemed to be growing meaner and crazier by the minute.

Antisemitism was on the rise, with bigots and hatemongers emboldened to say out loud what they once only whispered in the shadows.

The hateful acts and words have ranged from the ridiculous (Marjorie Taylor-Greene’s “Jewish space lasers”) to the disturbing (racist flyers thrown nearly a year ago into hundreds of driveways and yards in Greensboro, among other cities) to the outrageous (a former president having dinner with a pair of infamous antisemites).

It’s especially disappointing to see people of color wading into the muck.

Ill-informed pronouncements by the artist formerly known as Kanye West have included words of praise for Adolf Hitler and ramblings about going “death con 3” on Jews. NBA star Kyrie Irving posted a link to an antisemitic movie. Latino members of the Los Angeles City Council made racist remarks about Black people and dark-skinned Mexican immigrants.

The historically oppressed are oppressing each other.

This all the more reason why “She Wouldn’t Take Off Her Boots” is so important. Milstein considers Greensboro the ideal locale for her sculpture because of the city’s deep roots in the civil rights movement.

Milstein envisions people visiting the monument and then taking a stroll to the International Civil Rights Center and Museum only blocks away.

Greensboro could be “a destination for humanity and civil rights and for social justice,” she told the News & Record’s Dawn DeCwikiel-Kane in March.

Also soon to come: a statue of the first Black state Supreme Court chief justice in North Carolina, Henry Frye, and his estimable wife, Shirley, which celebrates the storied lives of Greensboro first couple. (I’m told they liked the model but would prefer that their likenesses were smiling rather than looking grim. That’s being fixed.)

Our monuments need to represent the full scope and breadth of who we are and these two landmarks-in-waiting will help to jumpstart that cause in North Carolina.

It’s also worth remembering that we who have borne the brunt of marginalization over the years have so much more in common than not.

There was something hopeful and uplifting about being under one roof for nearly a week — the power and the possibilities.

As for the toxic foolishness in the headlines today, I’d like to believe the words of an eccentric rapper prone to say nonsensical things and the words of a quirky basketball player who has professed that the Earth is flat don’t matter.

What matters even more is how we respond to them. Together.